Urban Afro Gospel artiste Munachi follows his last EP, “No Lele,” and the release of the single “Off Dem” successively with a new EP titled “Psalms of a Hood Boy.”

“Off Dem” which is a forerunner for the new EP Munachi was released on the 1st of September. It is the 2nd track and first single off the EP. The single is still having its impact on the audience but Munachi wasted no time in dropping the whole body of work for greater impact.

According to Munachi, “Psalms of a Hood Boy” EP is similar to the varying degrees of emotions and outpouring of the psalmist in the bible.

“Sometimes, the psalmist is in a praise mood, other times he is venting. On this project, you will find me in the same kind of position.”

The project contains 6 tracks in all, featuring singles such as “No More Trouble,” “247,” “Feelings” and the already released “Off Dem.” There is also a feature from rapper Posyble TGB on the track titled “Munachim”.

Just like the “No Lele” EP/album where the urban Afro Gospel artiste Munachi blessed us with 3 videos and a worldwide marketing distribution, he has hinted of a new video coming up for the track “Off Dem,” following the release of the EP. 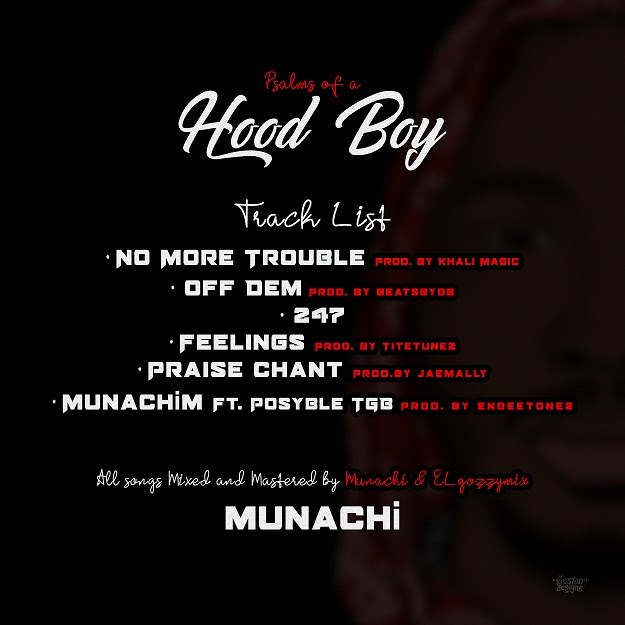 In a recent interview with Alex Amos, Munachi made revelations on his out-of-the-box style of Gospel music and also on how he had rejected a satanic deal to stand for the Gospel of Jesus Christ.

“I don’t call it temptation, the biggest victory is what I would like to call it. I did turn down the deal the devil offered me… my soul is not mine to give, my soul belongs to GOD,” Munachi said.

He also revealed that his message to the world is my message is that “GOD is not waiting for you to change before you can come to Him, He has made a bridge through the flesh of His Son Jesus Christ and He is asking you to come as you are, then the changing process can begin. That’s the message.”

Stream “Psalms of a Hood Boy” EP below:

Song Of The Week

You cannot print contents of this website Allbaze, thanks for your understanding